This entire review, by Lauren Muir, is about my "Memory Fountain" installation at Black & White Gallery:

"I missed the party. And based on the video of the event playing on the gallery TV, it looked like a good one. There was music and booze and everyone hooted at the sight of liquid fire. But even though the chances that I’ll get to see another iron pour anytime soon are relatively low, I can’t say I feel like I missed out. My recollections come quietly, so it seemed more apt to consider Michael Dominick’s work, Memory Fountain, on a calm, frozen day.

The furnace was in the corner, and the busted molds were laid out on a bench surrounded by metal drippings that resembled a pile of broken duck feet. Along the walls, clocks without hands looked on as a blue liquid dripped into a large, heated memory bowl, instantly turning to steam. On the night of the opening, molten iron had been heated and poured on site to make four-inch medallions with the word “memory iron” imprinted on one side. It seems right that memory discs are hefty and that they look like they’re to be worn around the neck. It also makes sense that memories can be reheated, reshaped and that often, you need some damn good oven mitts to handle them. The performance I find more puzzling.

Michael has said that, in the future, he’d like to perform an iron pour opera. It isn’t clear what that would entail but there are a number of dramatic themes built into the idea of metallurgy that he could draw on. For one, the story of Prometheus who not only stole fire from the Gods to give to man but who also gave us the knowledge of “mining precious metals” and the concept of art. This, of course, eventually led to the opening of Pandora’s box spilling evil and despair forever into the world. It’s a classic, tragic tale that probably deserves some sparks and operatic pageantry. I might even buy a ticket.

And yet, I can’t help thinking about the fact that it’s a little silly for a bunch of people to stand around and cheer someone on for doing what would normally amount to a dirty, sweaty job. It appears, based on the booming business of DIY handbooks, magazines and TV shows that we have entered into a new Arts and Crafts era wherein we are fascinated with manual labor. We buy expensive yarns and relish the twenty hours it takes us to knit a hat. We collect power tools and daydream of tiling showers and building tables. None of this is bad. Truth be told, I’d be the first to throw a party if I ever figured out how to make my own cheese. But at what point are we to call these self indulgences art? Are we just slumming it? Or perhaps, lop-sided vases aside, there is enough meaning to be found in our attempts to take the earth’s elements and make them our own, to make stone look like flesh, to steal the powers of creation from the Gods to make Faberge eggs if we want to. After all, what is enlightenment if not a do-it-yourself project?" 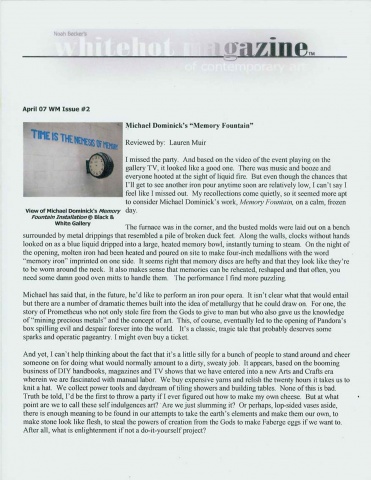